I don’t know how Arpege became a legendary perfume, especially since it doesn’t have Shalimar’s exoticsm or L’air Du Temps’ liberty but I am glad it did.

Actually, Arpege came out after Chanel No 5, in 1927. No 5 was presented in 1921 (sometimes I just talk and write about these dates but SERIOUSLY, 1921 is so long ago. Makes all this perfume history even more exciting) so it was natural to have No 5 inspirations.

The name Arpege comes from arpeggio, which means broken chord according to the dictionary. But thanks to more research, Arpege meant that each of the perfumes notes would be distinct, like broken apart and distinctive from each other.

According to Fragrantica, top notes are ylang ylang, jasmine and lily of the valley which makes it a white floral first and woody, powdery and everthing else afterwards.

Arpege is romantic, alright. To my nose, I say Arpege is nutty. Somehow out of somewhere, I detect a nutty nutmeg-ish note. But that’s only when smelled in Eau de toilette or as Lanvin called it, ‘Eau de Lanvin’ (olala!)

Arpege Parfum is heavenly. It smells almost like No 5 but it has its own space carved out. It’s STRONG. Seriously. But the mystery about this perfume is, like a lot of vintage fragrances, you can’t judge it at first sight. You have to take time to know it, like a person you find intriguing but you have to take time to talk and unwrap them. So each time I have dabbed Arpege on my wrist, I have smelled ylang ylang. I have smelled a heavy dose of amber. I have smelled rose. But the package is sophisticated, very. It’s vintage Parisian circa 1927.

Like Greta Garbo, it never reveals itself completely and the mystery remains. Imagination! Very much unlike a fragrance today. There’s an ad campaign, theres a million dollar launch party too. But then when you meet the reason behind it all, it’s 2D. Flat and emotionless. Like Amy from Gone Girl when you expect Holly Golightly.

Arpege in EDT is beautiful. Why you may ask? Because it’s one of those perfumes I’ve come across which transfrom like a painting of a scenery done in two mediums, acrylics and watercolors. The acrylic is the parfum, solid and bright. The eau de toilette is the watercolor, it has been watered down and is translucent. Light passes through it, making the air less formal and more relatable. Yet you know the framework is the same; same soul, different body.

Arpege has since been reformulated, how many times I don’t know but terribly, yes. The thing is, these people whoever do the reformulations of course spend their time to do their best to replicate the original versions. But these perfumes in the first case were not meant to be replicated. Perhaps discontinuing it would’ve solidified its image as it was. Much like Garbo. But in an effort to update it, Arpege has sadly lost its identity. It smells very sharp but in a cheap, drugstore kind of way with the ylang ylang and amber playing along but not happily, but snarly and mean. 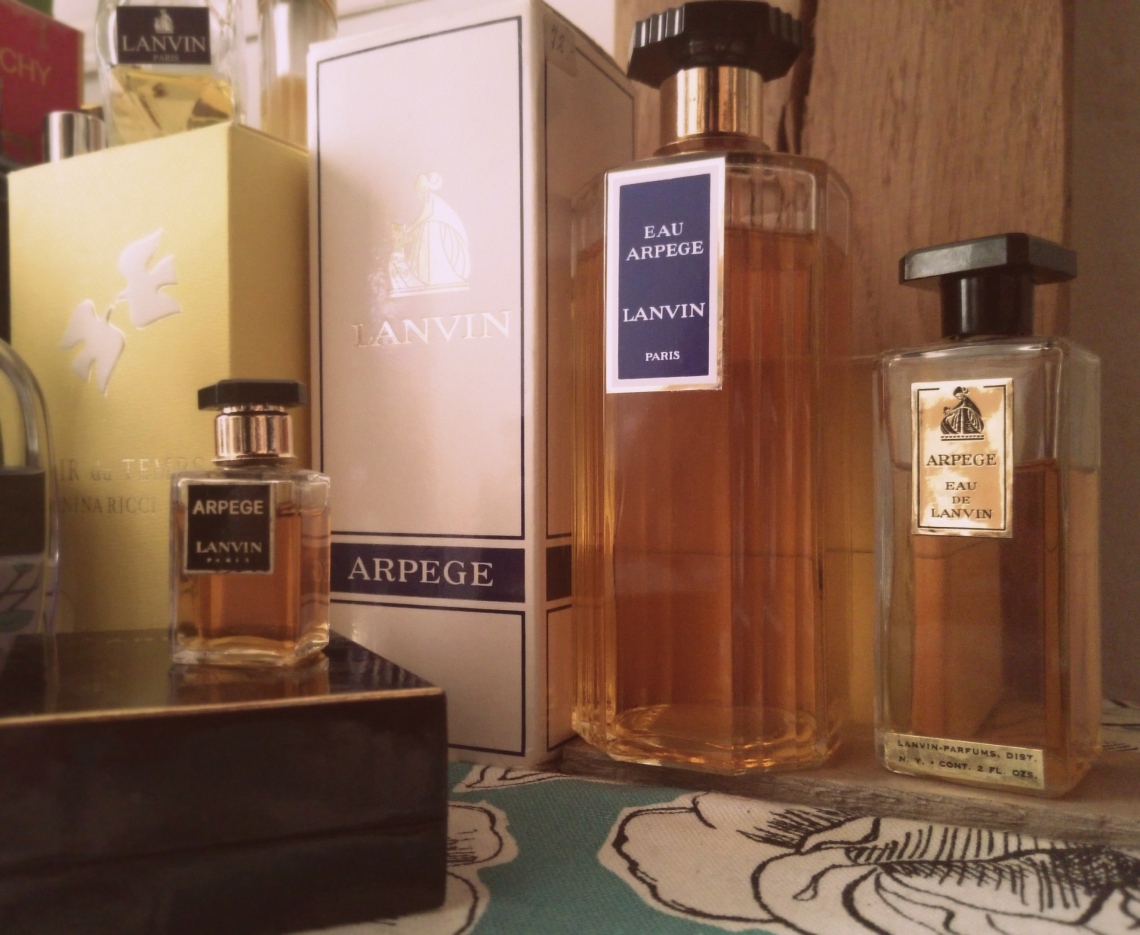 Good news is Arpege is widely available online in vintage form. I’ve seen 2 ounce bottles go for $20. I have also seen them go for $80. Might be because one kept their bottle in dark, nice temperature while the other hasn’t. So watch out for spoiled ones.

My own Arpege collection keeps growing as you can see…

Romantic. The past has a connection with everything I admire. I find joy in discovering that. View all posts by Abdul